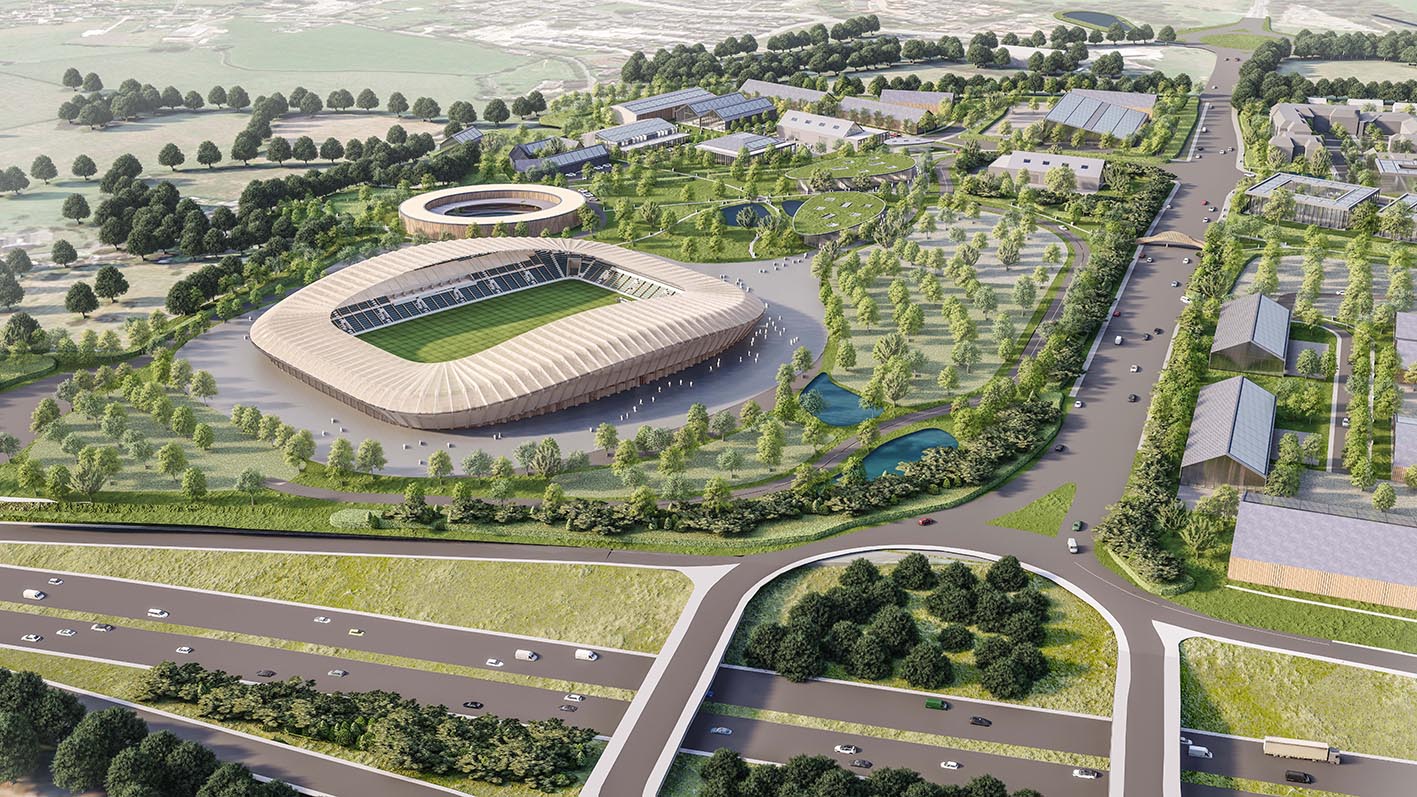 Ecotricity – the world’s first green energy company, has today revealed revisited plans for its long-awaited Eco Park development – the new home for Forest Green Rovers, next to Junction 13 of the M5 motorway.

The revisited plan includes the all-wooden 5000 seat stadium for FGR – approved in December 2019 and the use of land on both sides of the A419 to include a green tech business park. The site will feature 38k sq metres of office space and 18k sq metres of industrial space, designed to host companies working in the zero-carbon economy.

The development will contribute around £150m to the local economy annually while generating £2m per year in business rates for Stroud District Council.  The full plan, submitted today aligns with proposed changes to the local plan, and the district council and Gfirst LEP’s intention to bring green industries and knowledge-intensive sectors into the M5 growth zone.

Ecotricity will also build a comprehensive new training facility at Eco Park for FGR – recognised by both the United Nations and FIFA as the world’s greenest football club. This would bring training back into the district for the first time since the club went professional – because of a lack of facilities in the area.  The new training complex will bring together the youth, academy, women’s and first team together, and has already secured the backing of Forest Green Rover’s partner, Candriam – the global leader in sustainable investing.

The plans will improve the habitat on site – with a biodiversity net gain of almost 12% from its existing green fields – enclosing the stadium in a parkland setting with more than 2km of new hedgerows, several thousand new trees and wetland, and the return of the canal.  The site is also expected to self-generate over 80% of all energy used.

Ahead of forthcoming construction work, an extensive archaeological survey and dig has begun on the site. Expected to take 3 to 4 months – the dig will look for Roman artefacts.

“It’s taken a long time to get here, but Eco Park and the local plan are now aligned and we are measurably closer to being able to start work.  With Eco Park we’ll be able to properly push the boundaries of sustainable development. The beating green heart of this project will be the lowest carbon football stadium in the world ever, at least since the Roman’s invented concrete – which is fitting given we’ve got Roman remains on the site.   We’re hoping to get to work on training facilities in the next couple of months – and ultimately create a fantastic facility for all elements of the FGR football family to train together.”