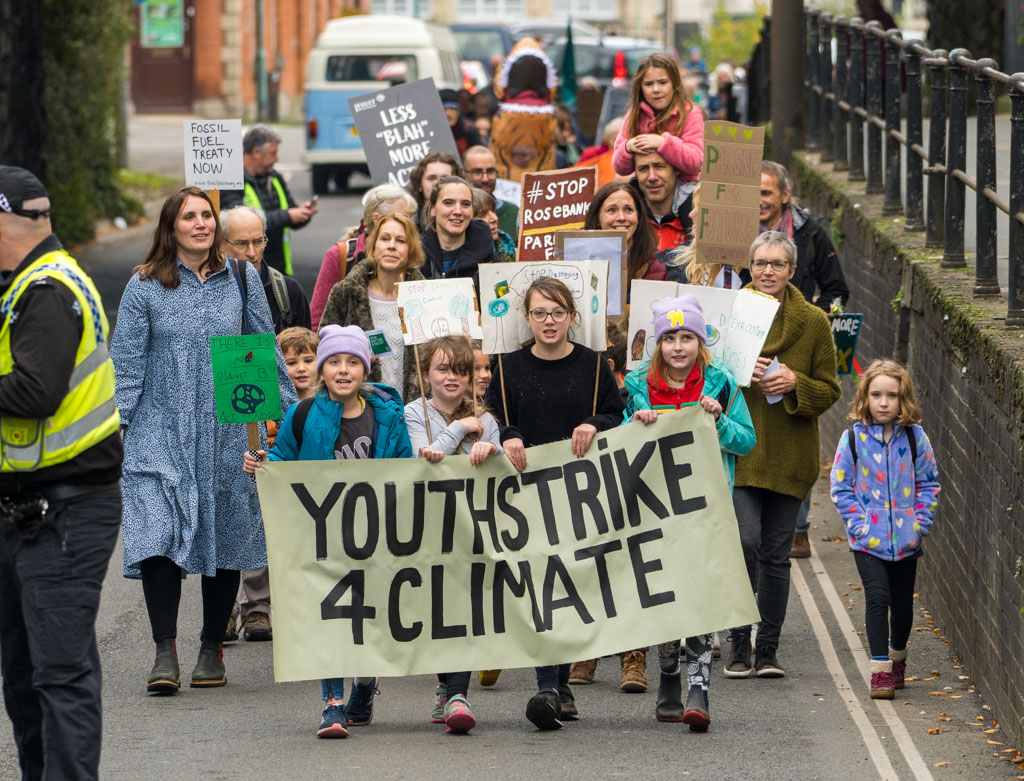 Protestors took to the streets of Stroud this morning, demanding climate action and an end to reliance on fossil fuels.

Starting at Wallbridge Green, the marchers headed into town and via the High Street made their way to the Sub Rooms where they listened to three speeches.

Dan Green, previously an organiser of the Youth Strikes in Stroud, said: “We’re right in the middle of COP27 at the moment and I’d like to reignite the momentum we had with environmental movements before the pandemic.

“Unlike the Youth Strikes which were largely school children, this is open to everyone. We hope to have a large youth presence and be youth-led but we welcome anyone.”

At the Sub Rooms Dan spoke first, saying: “I am tired. I have been protesting about climate change for nearly four years now. I’m tired of empty promises, I’m tired of endless greenwashing and criminal unaccountability. But I am exhausted by the people acting like there is plenty of time left.

“If, four years ago, we needed rapid actions where does that leave us now? Millions of people were left displaced by floods in Pakistan, over a billion animals have died in wildfires and the past eight years have been the hottest ever with parts of the UK still in drought now.

“Where is the decisive action we so urgently need? We know the solutions – stop using fossil fuels – that one thing would do so much.

“The voices of the people must be listened to – our whole planet depends on it – so we must rise up as one united movement, forcing change.”

Green Party Parliamentary candidate Pete Kennedy spoke next, highlighting the unusually warm November weather conditions: “There are people here in t-shirts – it shouldn’t be like this – it’s not normal, it’s the climate emergency and we’re seeing it and feeling it. It really is an emergency, we’ve had the hottest summer and droughts which, unless it rains a lot this winter, will continue into next year. And yet, we still have the politicians in Westminster saying we are doing enough, we are moving fast enough – it’s not true and we’re all at risk because of that.

“In Stroud we’re very lucky, we have a cross-party council that has got a plan in place for Net Zero by 2030. We need to take that model and show it around the country. It’s great to see so many young people here and we all need to work together to make the change that needs to be made.”

“We can make Stroud totally powered by renewables within eight years – let’s not wait for anyone else, let’s go and do it, let’s follow that dream.”

Pictures and video by Matt Bigwood