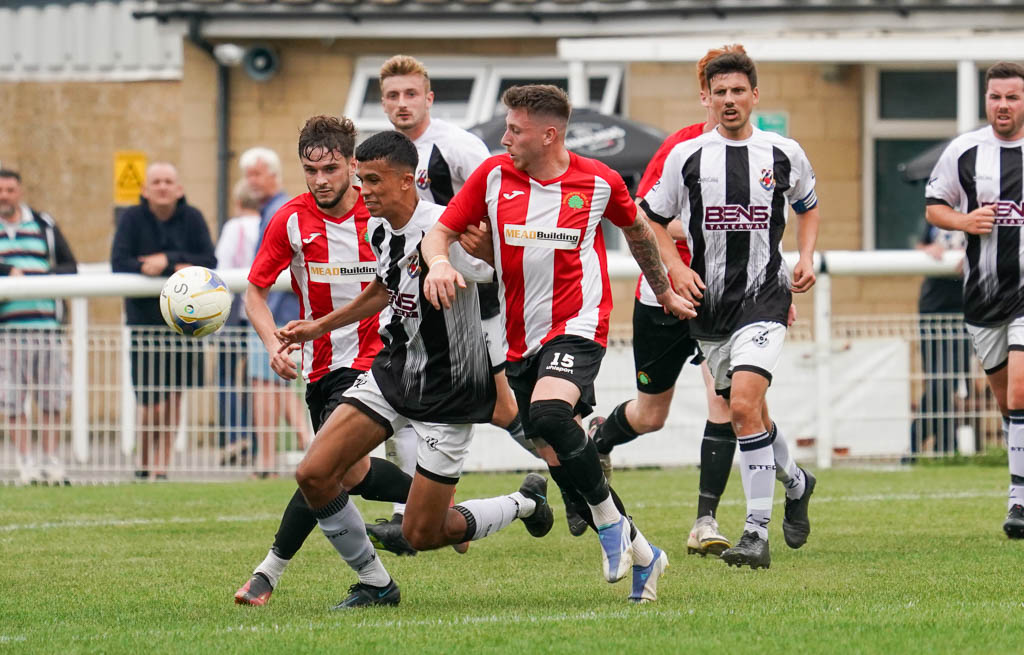 Manager Ian Soule was delighted with his side’s performance after a difficult opening period and was even more pleased with the way they adapted to the style he and Lewis Fogg made at the break.

Saracens certainly had the better start and found space down the flanks to get at Wood and Newell and Midwinter both fired over. Earle fired a shot pass wide of the far post but Duncan missed a gilt-edged chance for Saracens after 10 minutes – somehow lifting the ball over the bar from only 6 yards with the goal at his mercy.

Cheltenham thoroughly deserved to take the lead after 20 minutes when from a fast break Barnes – Wills found space and shot home into the bottom corner.

This galvanised Shortwood a Tunnicliff header was hacked clear and Payne had a shot well turned round by keeper Dix. Wood levelled after 33 minutes. Nath Payne’s excellent ball down the flank found Chris Earle and his volleyed low cross was forced home by Soule from 6 yards – a trademark goal. Wood enjoyed the better of the half without being able to force an opening.

Right from the start of the second half Wood flew at the opposition. Earle shot wide and Byrnes fired over and Wood pressed. Rhodes played Payne in on goal and as the defender whipped the ball off the Wood man’s toes Dix was force to dive full length to prevent an own goal.

Newell stung Muir’s hands but this was a rare foray. Tunnicliff had the ball whipped off his toes as he was about to score from a Payne free-kick and Payne whipped over the resultant corner. Tunnicliff soared above
everyone to send home a thunderous header to make the game safe.
Wood rang the changes to see the game out and the closest Saracens came was in the dying moments when a Duncan header drifted just wide.
Shortwood: Muir, Marks (Evanson 66), Tosdevine (Minnican 45), Byrnes, Tryner, Tunnicliff, Payne, Rhodes, Soule (Bowes 76), Eakers (Gibson – Clarke 76), Earle (Bradshaw 83)
Star Player: Joe Tryner –who was everywhere and marshalled his side excellently