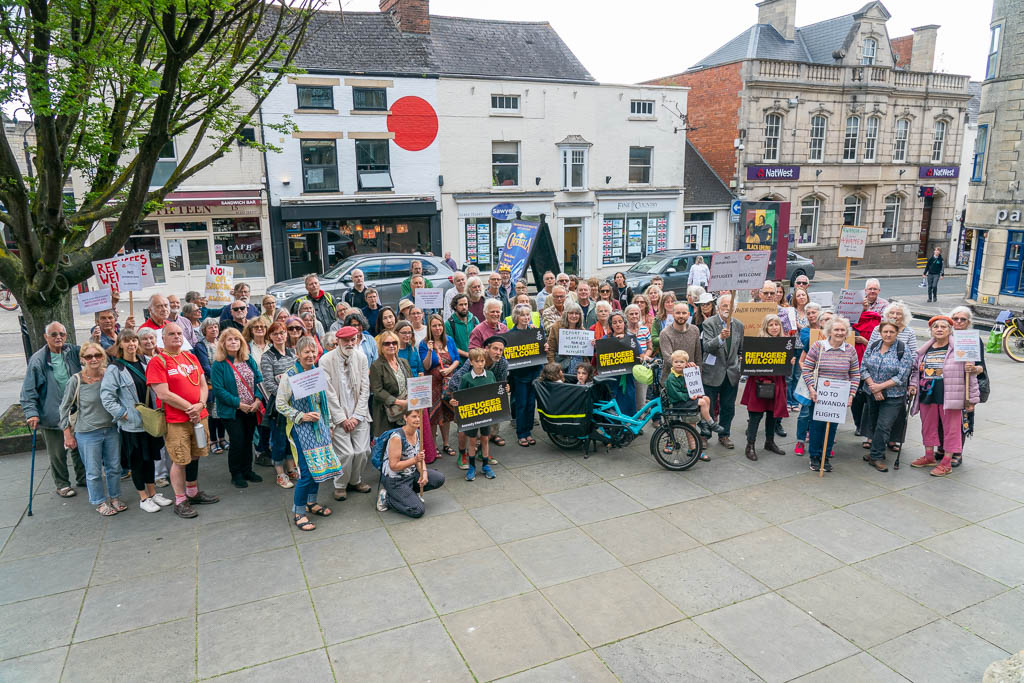 Around 100 people gathered on the forecourt of Stroud Sub Rooms on Monday afternoon to hold a silent vigil, organised by Stroud District Together With Refugees, opposing the deportation of asylum seekers to Rwanda.

Earlier this year the government announced that asylum seekers who are deemed to have arrived in the UK illegally will be sent to Rwanda in East Africa where their claims will be processed. If successful, they will be granted asylum or given refugee status in the country. Those with failed bids will be offered the chance to apply for visas under other immigration routes if they wish to remain in Rwanda but could still face deportation.

Pammy Michell, one of the organisers, said: “We are holding a silent vigil here in Stroud in support of asylum seekers and protesting about the horrendous, inhumane plan to send asylum seekers to Rwanda. That’s why we are here tonight. There’s a long tradition, a long-time support for refugees in Stroud.

“People in Stroud for ten or 20 years have been campaigning under different groups against government policy, and the hostile policies against refugees.”

Fellow organiser Paul Shevlin said: “I think we need to remember that within ten miles of here there is an Afghan asylum seeker, fearful of going out. Last summer he was in Kabul and had the authorisation to get on the plane to come to the UK.

“That plane had a bomb scare and didn’t take off. He got left behind. Somehow, he made his way on his own to the UK. He doesn’t get the advantages of the Afghan resettlement scheme. He’s treated as the sort of person who might be a candidate to go to Rwanda. He’s treated as an asylum seeker. We just think that’s unjust, inhumane, shameful, outrageous.”

The group suggests a number of ways to support their protest, including writing to MPs; petitioning the airlines that have flown asylum seekers previously; donating money to support the legal challenge to the government, and attending  a meeting of Stroud District Together with Refugees on Monday, June 20th, 7.30pm, at Star Anise Cafe in Stroud.