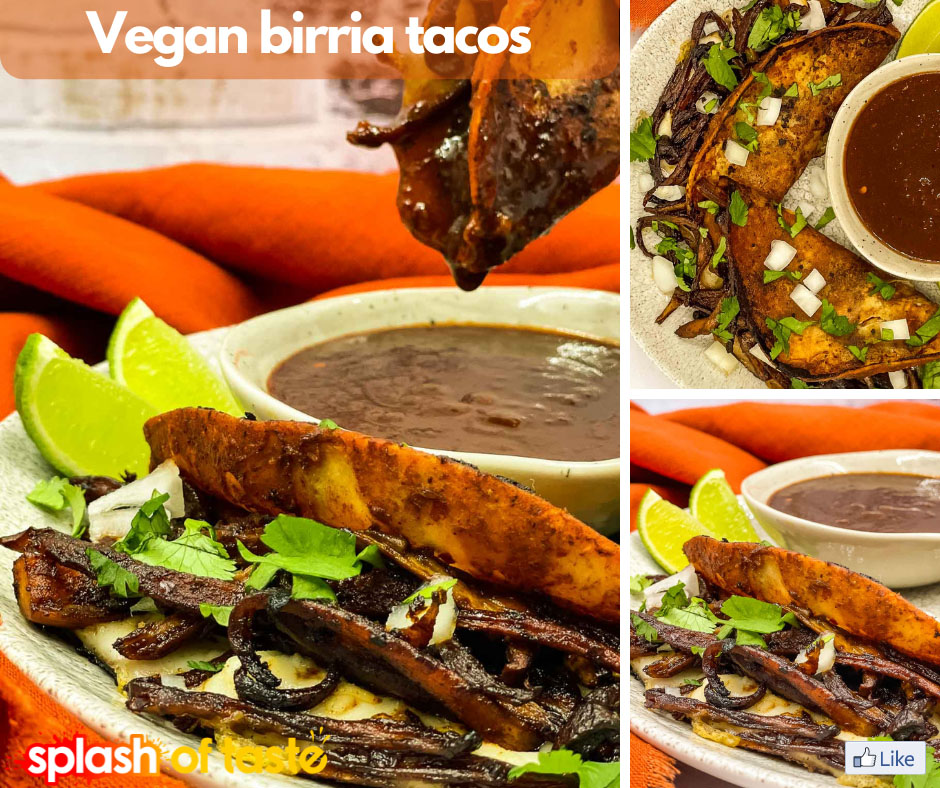 They’ve gone viral right now, so see what the birria tacos craze is all about!

Our version is vegan and has crispy shredded mushrooms full of meaty flavor and creamy vegan cheese, all cooked in a corn tortilla that’s dipped in the most insane vegan birria taco sauce that you will LOVE.
Preparation time 30 minutesCook time 1 hr.

Next, line a baking tray with parchment paper and place your garlic and onions, and, using your hands make sure that they are all covered with vegetable oil. Now, grill them under high heat until you see that they are charred around the edges, approximately 20 – 30 minutes, remove them from the oven and place them in a food processor or blender.

Blend until you have a smooth sauce. Transfer to a pan and bring to a boil, then reduce the heat, place the lid on and simmer for approx. 45 minutes to an hour.

Toss the mushrooms, and then cover them and set them aside, leaving them to marinate while your sauce is simmering.

Once the sauce is ready, place a frying pan over medium heat, add oil and when it’s hot, place your shredded mushrooms, be careful not to overload the pan have one layer only. Cook your mushrooms until you see that they have started to crisp up around the edges and are turning brown, for approximately 12 minutes.

Then it’s time to add your sauce, add a ladle or so of sauce to the mushrooms, stir and cook for a further 3 – 5 minutes.

Place another pan over medium-high heat and add oil. Now, take your fresh corn tortilla and dip it into the birria sauce, so that the whole tortilla is covered in sauce.

Now, place the tortilla in the pan, add vegan mozzarella cheese and mushrooms to one-half of the tortilla, cook until the bottom of your tortilla is starting to crisp and turn brown, approximately 1½ minutes.

Then, using a spatula fold over the tortilla, and press down gently to hold it together.

Find out more about birria tacos and tips for making yours perfectly https://www.splashoftaste.com/vegan-birria-tacos/