Do you recognise this man who approached girl at train station? 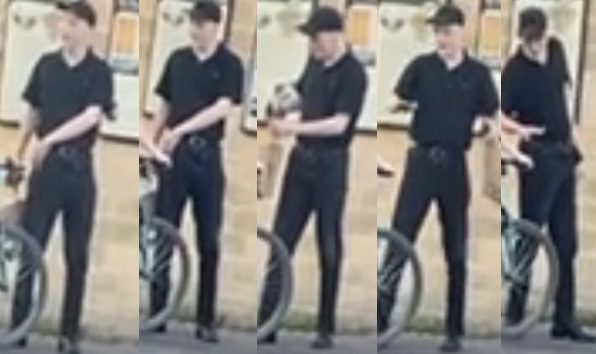 Police investigating a suspicious incident at Stroud Train Station have released images of a man they want to identify.

The images were captured on a member of the public’s mobile phone, before they intervened when a man had approached a girl on a bike.

The person who helped later reported the incident to police, and said that the man had tried to stop the girl on her bike from leaving the area.

The person who intervened approached and spoke to the girl, which resulted in the man leaving her alone.

Investigating officers have not been able to identify the cyclist yet, who was thought to be a teenager, and they are appealing for her to come forward so that they can talk to her and check that she is ok.

The man was described as being white and about 6 feet tall. It is believed he was in the area for around an hour on Thursday, July 14th, and police are keen to hear from anyone who spoke to him or saw him as his behaviour was reported as being suspicious.

If you recognise the man pictured, or you are the girl he approached, you can provide information to police online by completing the following form and quoting incident 493 of 24 July: https://www.gloucestershire.police.uk/contact/af/contact-us/us/a-crime-that-has-already-been-reported/