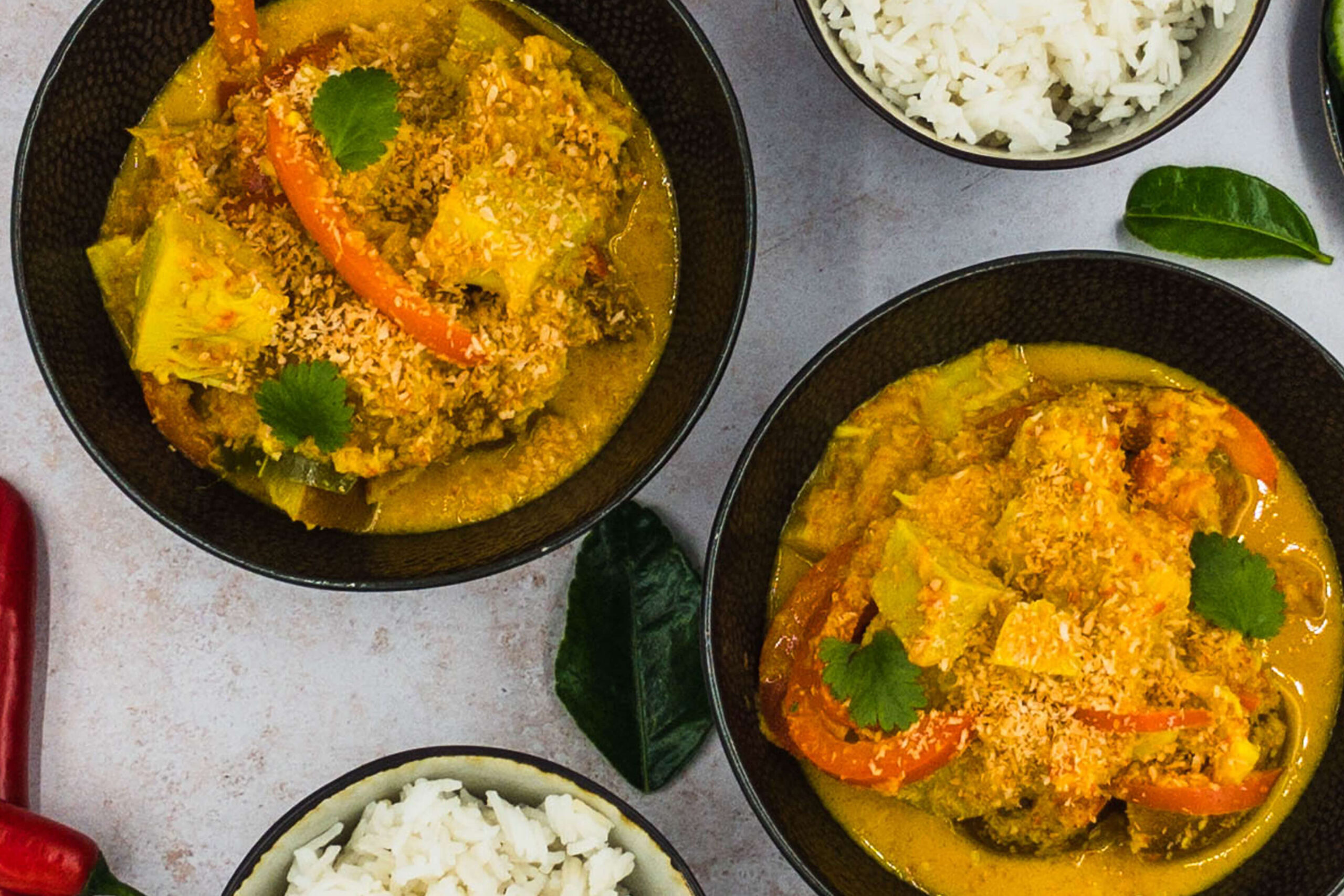 A spicy, citrusy wonderful jackfruit and potato rendang curry. Transport yourself to Asia with this amazingly tasty curry, you’ll want to make it again and again, writes Mandy Applegate.

Prepare your potatoes and jackfruit. Wash your red potatoes, you don’t need to peel them. Then chop them into quarters or smaller if they are large potatoes. Once you’ve done this, set them aside in a bowl
Next, you’ll need to take two cans of young jackfruit and chop them into small bite-sized pieces and once again, add the jackfruit into a bowl and set them aside.

Now you’ll need to marinate both the potatoes and jackfruit. Over each bowl juice half a lime, sprinkle 1 tsp of turmeric powder, and a pinch of salt. Stir until everything is well covered. Leave them both to marinate.

Take your red bell peppers, wash, deseed and then cut into thin strips, then set aside.

It’s time to prepare your toasted coconut. Now take your desiccated coconut and dry fry it over medium heat for approximately 4 minutes until they look golden brown and toasted.

Once they are cooked, then set aside. Next, you’ll need to make your rendang paste. Chop between 3 – 5 red chilli peppers into small pieces. If you like your curries mild then remove the seeds and start with 3 chilies and only add more by tasting the paste. You’ll now need to chop your lemongrass stems and add them – it’s only the bottom half of the lemongrass that you want.

Add your galangal paste followed by your freshly peeled ginger. Chop it into smaller pieces before adding it to the food processor. Peel your cloves of garlic and add them to the whole. Next, chop your onions into quarters and add them in. Add in your ground coriander. Now blitz until a smooth paste is formed. Don’t add any water to the paste as you won’t need any. Set the paste aside. Now it’s time to get cooking. In a frying pan add 1 tbsp of vegetable oil over medium heat and brown your potatoes for around 3 – 4 minutes, making sure you stir and turn them. Now place them back in the bowl with any of the marinating liquid.

Now take the same frying pan and brown the jackfruit, this time it should take around 3 minutes, stir and turn them and then place them back in their bowl. Next, you’ll need a wok or large pan. Add in 1 tbsp of vegetable oil and heat on medium heat. Add your cinnamon stick and fry for just 15/20 seconds before adding your delicious paste. Give it a good stir and saute it for around 5 minutes, it shouldn’t need any additional oil or water added to it. Now add in your prepared potatoes and stir them into the paste so that they are evenly covered. Next add in your coconut milk, along with your water. Give the mixture a good stir. Now take your kaffir lime leaves and a pair of scissors and cut them very finely into the pan and give them a good stir into the mixture.

Now cover the pan and cook for approximately 15 minutes, stirring occasionally – it should smell really good by now.

Now it’s time to add your bell peppers, give them a stir so they are covered and cook for a further 5 minutes. Then add in your marinated jackfruit, stirring it in so all the ingredients are covered.

Cook for a further 5 minutes and when it’s done, stir in two-thirds of the toasted coconut and remove the cinnamon stick. Now it’s all ready to be served! Serve in bowls and garnish with the remaining toasted coconut and fresh coriander. It’s like you’re in Asia – enjoy!