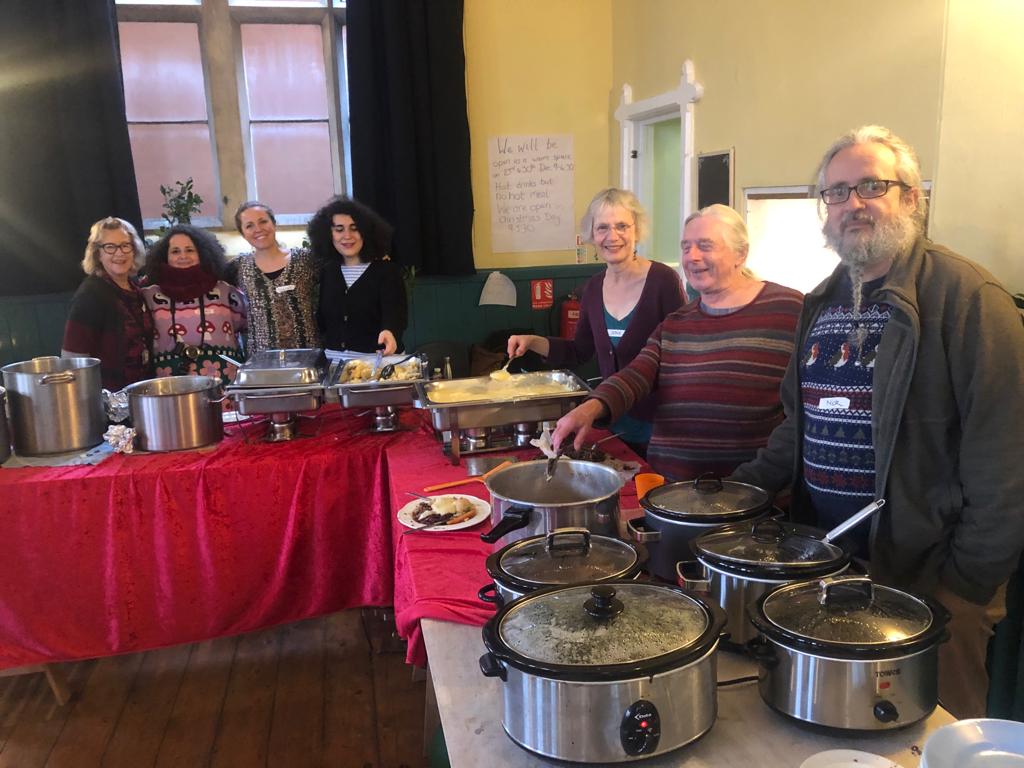 Christmas Day in Stroud was made considerably brighter for many people.

Some who might otherwise have been on their own, struggled to heat their home, put food on their table, or simply yearning for more community connection found Christmas cheer in The Trinity Rooms. The Community Hub opened the doors at 9 am for more than 90 people to enjoy good food, good company and fabulous entertainment. A mini-bus brought refugees from a hotel to join in the fun.

The Hub put out a post on social media and around the town asking for sign ups from those wanting to participate. Within a few days a WhatsApp group had been created with 57 participants. Offers of practical help, donations of food, and people keen to attend flooded in.

Callum and his team prepared ahead of the day, and then early Christmas morning. Clare said: “We thought it all went brilliantly. Great organisation, and the fantastic volunteers were amazing, especially the chefs.”

Laurence Kapoor – chef at the Stroud Subscription Rooms spent Christmas morning in the tiny kitchen at Trinity Rooms with a team of volunteers ensuring the food went out on time. There was also a lot of preparation before-hand as 50kg potatoes were peeled by volunteers, 100 hand crafted crackers were made, the hall was beautifully decorated with greenery, Christmas trees and table decorations.

On the day itself the hall buzzed with excitement. Carol singing, quizzes, fun and games were organised by entertainment volunteers. Santa, Mrs Claus and an elf came to share some gifts with grown ups as well as the children. After lunch the highlight of the days entertainment was a surprise visit from Tweedy the clown who gave up part of his Christmas day to delight everyone with his hilarious family fun. Carla added: “Getting Tweedy on Xmas Day was amazing, so much silly fun and great to have the kids engaging with him.”