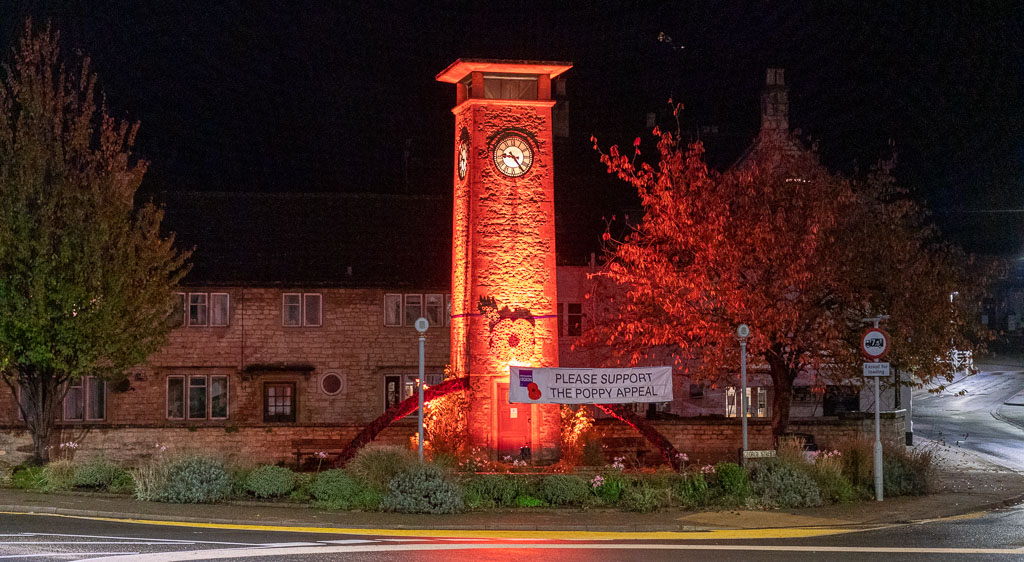 The Clock Tower in Nailsworth once again forms an eye-catching focal point in the run up to Remembrance weekend, with thousands of knitted poppies lit by red light.

“The knitted poppies were originally made by volunteers to commemorate the centenary of the First World War. The display was assembled by Jane Luff from Daisy Jane Clothing with some help from volunteers and the fire service,” explained Nailsworth Town Council’s Deputy Clerk, Kirstie Trueman.

“Nailsworth Town Council is responsible for lighting up the Clock Tower and we have changed the coloured lighting gels to red specifically for Remembrance.”

Nailsworth’s Clock Tower, a listed building, is also a war memorial. Another striking display has been installed at St George’s Church with the words ‘Lest We Forget’.

On Friday 11th a Remembrance ceremony will be held at the Clock Tower starting just before 11am, and wreaths will be laid by the Mayor and representatives of the Royal British Legion.

On Sunday 13th the annual town Remembrance parade will start in the Town Square at approximately 10.40am. The parade will travel down Spring Hill and along Fountain Street to St George’s Church where the Remembrance Sunday Civic Service will take place. Wreaths will also be laid at the War memorial.