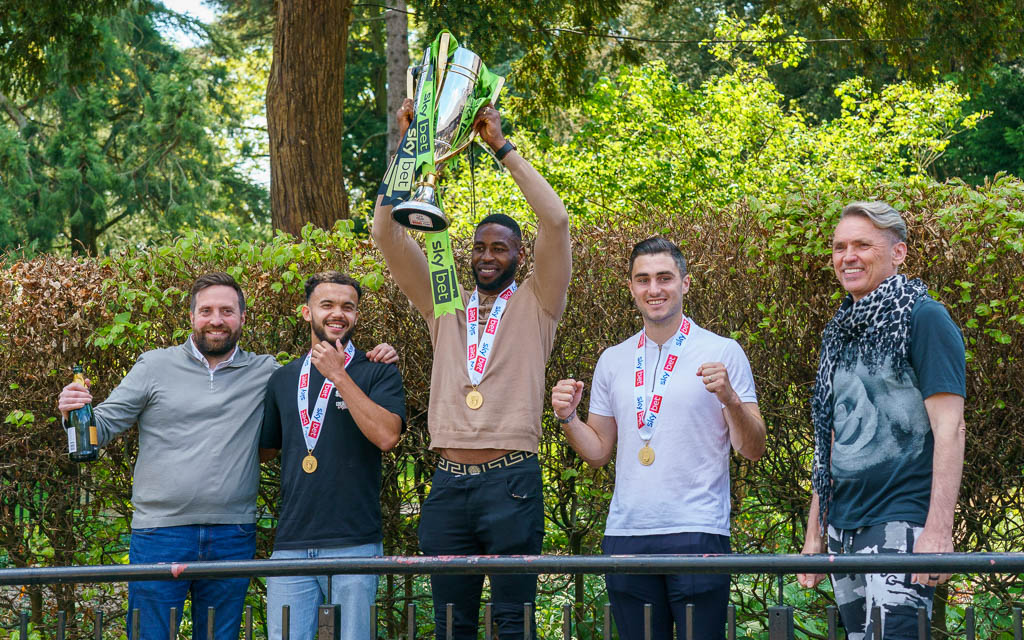 And breathe… Banal advice on respiration isn’t something we routinely issue at Stroud Times, but for all the Forest Green supporters who have been discovering a new shade of white in their knuckles as they followed the fortune of the team in this season, the morning after the night before marks a key moment to check ourselves for vital signs.

On Saturday afternoon, our hearts stopped. Mansfield went up a goal; it was over. But then we levelled and our pulse resumed. Maybe we had a chance? In such moments all FGR fans will know it’s not losing that hurts, it’s hoping. Sure enough, another goal from Mansfield strangled the dream. Only defibrillation could work now, delivered by the divine foot of last-minute, subbed-on striker Josh March who, in levelling the score in the dying moments of FGR’s final clash, ensured the Green Army not only had promotion to League One but also finally, deservedly, could grab the SkyBet trophy. We were top.

Or sort of. A separate drama, off-stage, as the clock ticked down during these final agonising ten minutes, was also pivotal to everything. Any goal, by any means, struck more than 200 miles away at Exeter’s home game against Port Vale would have meant FGR remained promoted – but with no such pomp and ceremony.

Yet Exeter, on fire and hosting Port Vale at a goal down, somehow didn’t do it: despite ousting FGR from top spot in the League the previous Saturday, they froze, a goal down. The final whistle in Devon blew, sending a shockwave of hysterical jubilation all the way up the A38 to Nottinghamshire. Exeter, we love you. Port Vale maybe even more.

The trophy was ours. Except it still wasn’t. No, it had been pre-ordained by English Football League officials, in their consummate wisdom, that FGR would most likely not triumph in the final fixture. Exeter, the obvious heretics had calculated, would. So come the moment at Field Mill when the faithful fans and Forest Green players convulsed in the knowledge that we’d done it, great spumes of champagne erupted into the spring air – only to land in an empty space where the trophy might catch them. Oh well, who said you need receptacles for the taste of ecstasy?

All the same, the hardware was coming home. And thereby ensues one of EFL’s funniest bloopers for the 2021-2 season: down in Devon, a man reverentially inserts the trophy into a van and starts driving up the M5. By a mutually agreed marriage of trajectories, it’d reach the Stroudwater Interchange, junction 13, just as the FGR coach from up north was hanging a left to return to the New Lawn in Nailsworth.

This is, even from the most fervent imagination of football romanticists, not the most inspiring of trophy handovers; I’d imagine when Cheltenham got it last year, it was passed over against some backdrop of faultless Regency architecture. Maybe even Swindon, the year before, had managed something less underwhelming.

But that doesn’t matter. And anyhow, Stroud District Council stepped up today to do something with a little more civic swank. OK, hosting a celebratory press conference and plaque handover at a museum might not sound like the media event to set the world on fire, but Stroud’s delightful Museum in the Park, if you’ve somehow never succumbed to its charms, is the least museum-ish venue you could stumble into.

And there it was. That thing that’s shimmied in the collective hopes and dreams of thousands of fans both here and around the world; more than mere metal, a shining statement that only reaches the hands of any team that has grunted its way through 46 times 90 minutes of pitched battle, not to mention successfully weaving through a year of disbelief, doubt, plenty of broken hearts and one severed anterior cruciate ligament. All mattering not, as FGR chairman Dale Vince stepped forward, accepted the plaque from council representatives and said yeah, he felt alright.

Dale is not a man given to the kind of outbursts of exuberance that make legendary football memes, but he acknowledged how much the endgame had been a Hollywood ending, presumably a reference to such movies as Singing in the Rain and the Wizard of Oz, not Taxi Driver or Marley and Me.

Nope, the only dead dog was of the black variety that threatened to wag its tail in the nightmares of fans. Not least when the infamous ‘wobble’ period threw a sublime series of results out of kilter earlier this spring – and then threatened, in the final games, to return. But that was then and this treasured trophy is now. We saw it; it really is real.

Let’s breathe deep then, and smell success. And tomorrow afternoon, at Nailsworth’s New Lawn, prepare our lungs. One green giant of a party looms. Having battled through and having stuck to its green guns despite all opposition and naysaying, could any team deserve to party more?