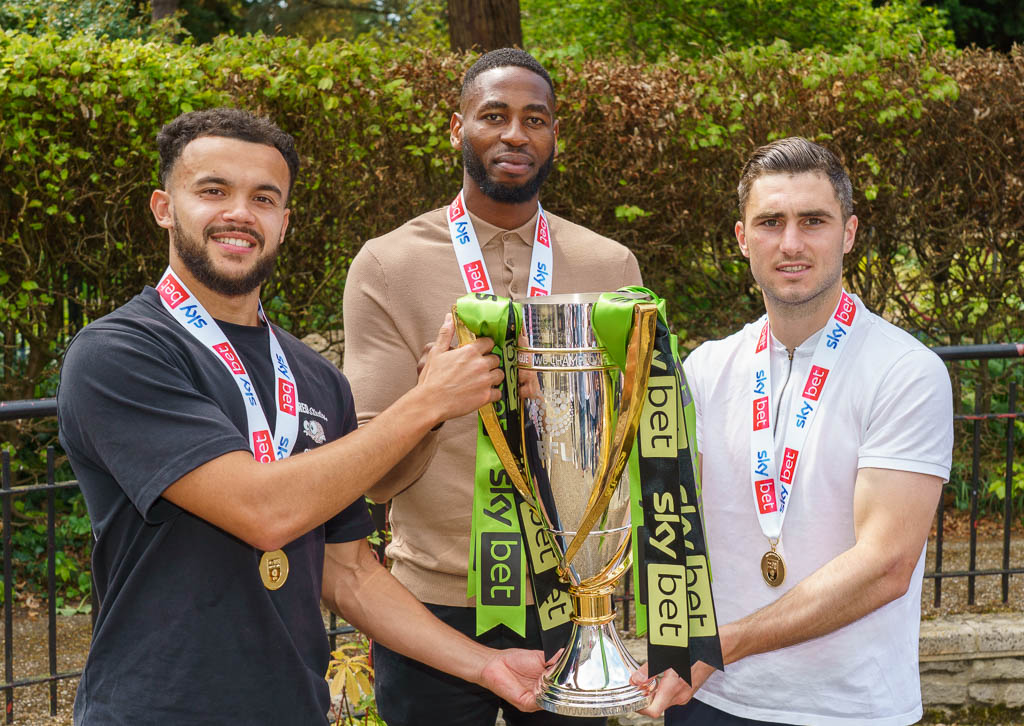 Club Chairman Dale Vince and Forest Green Rovers players Jamille Matt, Dom Bernard and Jordan Moore-Taylor showed off the EFL2 trophy to gathered media and civic dignitaries at a celebratory event at Stroud’s Museum in the Park this afternoon, Sunday.

Cllr Steve Robinson, Chair of Stroud District Council, joined by Council Leader Doina Cornell, presented Dale with a commemorative plaque as recognition of the club’s promotion into League One.

“It’s been a hell of a season and there was a Hollywood ending to the season yesterday, which I think is pretty fitting actually,” said Dale, “It was a great way to win it.

“The rescue mission of Forest Green, which is what it was for me, started back in 2010. In that first season we stayed up on goal difference, so to win the league 12 years later on goal difference is for me a nice piece of symmetry.”

“It’s a historic moment for Forest Green Rovers and the district, and it is only
right that we marked this terrific achievement in this way,” said Councillor
Robinson, who is a ward member for Nailsworth. He became a supporter at a
very young age, when his late brother David played in goal for FGR in the
1950s.

“I would like to say on behalf of the whole district, congratulations to everyone
associated with Forest Green Rovers, and we wish you the best of luck for
next season.”

Councillor Cornell added: “Lots of people across the district and beyond were
delighted to see FGR secure promotion with the title and we were honoured to
welcome all from the club and pay tribute to their success.”

The Museum in the Park is open Tuesday to Sunday and entry is free-of-
charge. Included in the range of exhibits is Forest Green Rovers memorabilia
including a shirt worn in the 1982 FA Vase final victory.