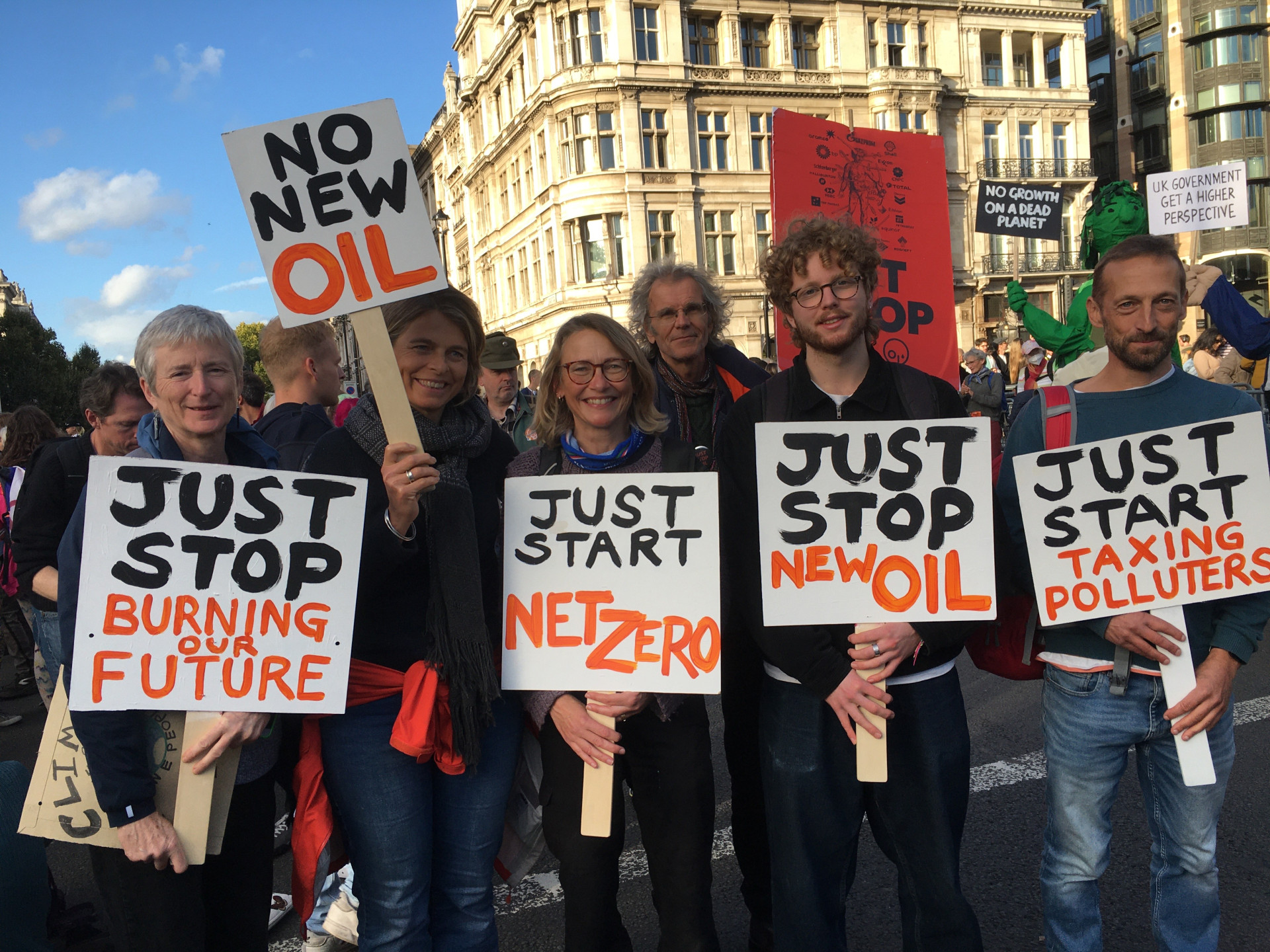 A member of Stroud’s Just Stop Oil group reflects on the past few weeks.

It was a hot July. As individuals, like many others, we had experienced increasing helplessness and desperation in the face of the world’s lack of effective action in tackling the threats posed by climate change. This summer’s heatwave increased our anxiety. We were all looking around for a way to feel that we could make an impact and help create positive change.

One way or another, Just Stop Oil caught the attention of each one of us, separately. The simplicity of their demand, that the government should keep its commitment (made at Cop26) not to licence any new fossil fuel initiatives, was attractive: it is feasible, practical, simple, scientifically sound, and time-based.

Not only that, but the demand is supported not only by the UN, but by the International Energy Agency, whose Executive Director was quoted by the Guardian saying: “If governments are serious about the climate crisis, there can be no new investments in oil, gas and coal, from now – from this year.”

And so, over a period of a few weeks in which we responded to leaflets and attended talks, our group evolved. We’re just a group of diverse members of Stroud’s community, brought together by our concern. Our ages range from 18-80, our jobs from writer to care-worker, artist to gardener, student to councillor, teacher to carpenter, midwife to scientist. We came together to try to take action, to reduce our feeling of powerlessness.

Sometimes, you’re not sure of the road down which your early steps will take you. This was the case with us. We set up JSO Stroud, got to know each other, attended very professional (and, as we’d learn later, relevant and crucial) training in Non Violent Direct Action and, with determination and trepidation prepared ourselves for an autumn of protest, awaiting direction from Just Stop Oil.

The first march, on 1st October, saw 25 of us head to London to join the protest. We marched peacefully through the streets, gathered in Parliament Square for a rally, then dispersed. Some of us stayed to do the same the next day. Was any of this covered by the TV? No. Sunday’s march took us to Waterloo Bridge, which we blocked. The principle is to stay put until forced to move. For some of us, this meant agreeing to move when the police arrived; for the more courageous, it meant arrest. Please don’t assume that being arrested is an easy decision to make. I bottled out, and watched in tears as my gentle friend was carried away by the police. A few minutes after his arrest, an 80 year old female vicar was arrested too. You find yourself, in such a situation, wondering what has become of our country. It’s frightening.

The following weeks saw waves of activists heading to London to participate in road blocks. Why are people like us, like me and like you, prepared to face arrest for the first time in our lives? Why are we prepared to accept police sentences and perhaps affect future chances of employment? Why are we prepared to face the anger and potential violence of the public who are delayed by our actions? Writing this, I know that some readers will share the fury we’ve encountered on the streets; I also know that many readers will understand exactly why we’ve acted.

The night before my action, I travelled to London and met the other members of my ‘team’. We hadn’t met before. Everybody was scared but determined. This was for our children and our grandchildren, for your children and for all the world’s children; we were doing this because we are desperate. We were going to do this because we need everybody who shares these concerns to rise up and seek a change of direction before it’s too late. Yes – we were seeking attention, but not for ourselves. The anxiety within the room was tangible both that night and when we met again in the morning.

I felt sick, and I wasn’t even planning to block the road; I was there for outreach and media. Soon, everybody else would have to stride out into the road the next morning, sit down, and relinquish any power they might have over what happened next. Many were here for the first time: a cross-section of the communities in which we all operate. They’re people who would never have dreamed they’d ever be arrested, people who, if our politicians could be trusted to steer us in the right direction, would have been much happier spending the weekend safely at home with our families. But we couldn’t.

I wish people who condemn JSO could hear the morning conversation of activists. We know that what we’re doing will inconvenience people, and we hate that; we know that people will be angry and possibly violent, we fear that; we know that we’ll be arrested, we accept that. We trust each other and we trust the reason for our action. With this strength, trembling and often in tears, we sit in the road. It’s not fun.  The team sat down at 10.30am and the beeping started, the shouting began. The police arrived about an hour later, during which time, contrary to populist media accusations, we let through emergency services and a blood transfusion delivery. The whole planning regarding who will ‘glue on’ takes into account the importance of leaving a lane free for ambulances.

We know it’s inconvenient to be held up on your journey; we know we’d be frustrated ourselves, but the inconveniences ahead if we don’t change course are far, far more severe. We’re not targeting motorists and trying to persuade them to walk – we drive too. We all operate within a system which makes us hypocrites; we accept that. The oil companies have set us against each other by creating the idea of ‘personal carbon footprints’; we need to join together against their power and influence in political decisions which are leading to destruction of everything we love: our planet, our comfortable, survivable climate, nature, our homes and our civil society.

Popular media shows the angry, shouting men who try to intimidate the activists, often throwing us to the side of the road. Rarely, if ever, do they show the quieter majority who thank activists, praise their courage and conviction, often touching their shoulders to offer quiet words of support. Rarely, if ever, does this make the headlines. After all, that would suggest that there’s a groundswell of support for our simple demand. The Government prefers to keep that quiet.

The following day, I found myself in Westminster Magistrate’s Court to offer support to friends who had been arrested. This was the first time this had happened and we were all shaken. Half of the team had been released the night of the action, as is more usual, whilst others had been kept. Selection seemed random; the luck of the draw. The crown prosecution service wanted the imposition of tags, curfews and harsh bail conditions but the magistrate was more reasonable. Nevertheless, it was distressing to see good people behind the glass wall separating suspected ‘criminals’ from the rest of us. It reminded me very much of Miller’s ‘The Crucible’: good people in an insane world.

And so our legal system does its job; our police do their job (usually with kindness, good humour and respect, for which we’re grateful); our journalists do the work for which they’re paid, so the protests are often ignored or irresponsibly reported; and our politicians threaten to crush us. Some people support them in this. Maybe you do too.

And then there’s the tomato soup, the pie in King Charles’ waxwork face, paint on Harrods,55 Tufton Street and the bank of England. Did this get more attention than the first peaceful protest? Yes. Did it get more attention than the road blocks? Yes. Was the aim to attract attention? Of course it was and it worked. No lasting damage was done and nobody was hurt. Surely it’s irrational to be more angry about a cake in the face of a waxwork than about the abuse of wealth and power leading us to destruction.

Of course, people say it shouldn’t be done like that. Fine, but what should we do instead? Please tell us.

Civil disobedience, whether the American Civil Rights Movement, the Suffragettes or anti-apartheid protests, has always been opposed, condemned and criticised. People have always said ‘wrong time, wrong method’, but not so much afterwards, when the desired change has been achieved. Then statues are erected.

Now, the autumn of action draws to a close. Just Stop Oil await positive action from the Government whilst activists go home to lick wounds, deal with our eco-anxiety in other ways, and wait. At the moment, our expectations are low, but we’d love to be proven wrong. What we really hope for is a mass movement of people prepared to demand urgent change. What we really hope for is a habitable planet for future generations, for healthy ecosystems supporting life and for politics and the world to be free of the destructive and corrupt influence of the fossil fuel industry. What we really hope for is for you to join us. There are many roles to play and ways in which you can help.

Until change is achieved, we fight on. We’ll be back.

After everything I’ve seen of JSO; after everything I experienced in London; after seeing such caring, responsible and meticulous logistics; after meeting such wonderful, compassionate and brave people, I feel fortunate and proud to be associated with this crucial movement and its calm, purposeful energy.