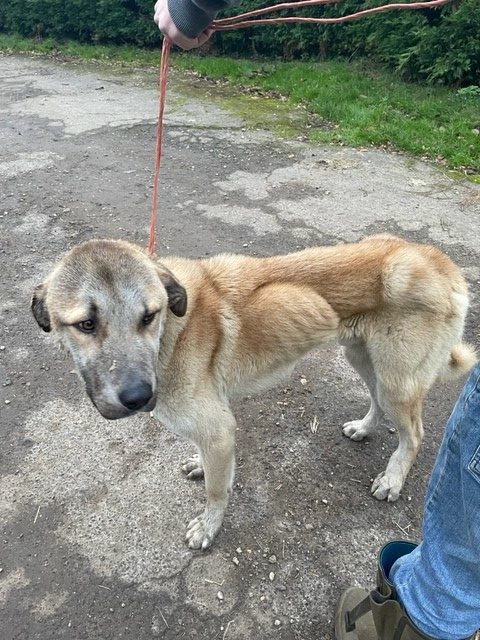 Shocking before and after pictures show an Anatolian Shepherd that was discovered severely malnourished by animal welfare officers.

Stroud District Council Officers are appealing for the public’s help in finding out more about Thor’s background while he recovers.

The dog weighed just half what a dog of his size should when he was found on November 8 at Harescombe. Typically an Anatolian Shepherd Dog should tip the scales at between 50 and 60kg – he weighed just 27kg when officers took him to Wood Vets in Quedgeley, they were told he was near to death.

“He’d been found wandering in a lane by some farmers, who patiently coaxed him over until they were able to secure him and call me,” said SDC Animal Welfare Officer Alex Myrie. “He was emaciated, had filthy and scurfy skin, was incredibly subdued and very dehydrated. He had a weak pulse and a body condition score of 1 out of 9 (the lowest score). Blood tests found no underlying health conditions causing his emaciation – it was simply down to lack of food.”

Named Thor by a vet nurse, he spent two days being rehydrated and put on 2.3kg in that time, mainly due to receiving fluids. He now has a strict feeding plan in place.

“When animals have been starved, their bodies often struggle to cope with large amounts of food, so they have to feed very small amounts of a gastro-specific food around 5 times a day,” said Alex. “This is gradually increased over time and the frequency gradually reduced to around 3 times a day until they reach a healthy weight.”

Teckels Animal Sanctuary cared for him on behalf of Stroud District Council before he was moved to a foster home. Currently, a permanent home is not being sought.

“He’s got a long way to go and won’t be ready for rehoming for some time, but he’s already put on around 11kg, learned to sit for treats, and loves a tummy tickle and a cuddle,” said Alex.

“Thor sadly wasn’t chipped so we really have no idea where he’s come from or how he got into this appalling state. If anyone has any information on who owns Thor or who is responsible for his poor condition, we need to know.”

The breed originated in Turkey as a livestock guardian, and they are rare in the UK.

SDC Environment Committee Chair Chloe Turner said: “I don’t know what would have happened to Thor had our Animal Welfare Team not been alerted by those who found him. Anyone who knows anything about him should call or email us straight away.”

The Animal Welfare Service can be contacted on 01453 754490 or by emailing environmental.health@stroud.gov.uk