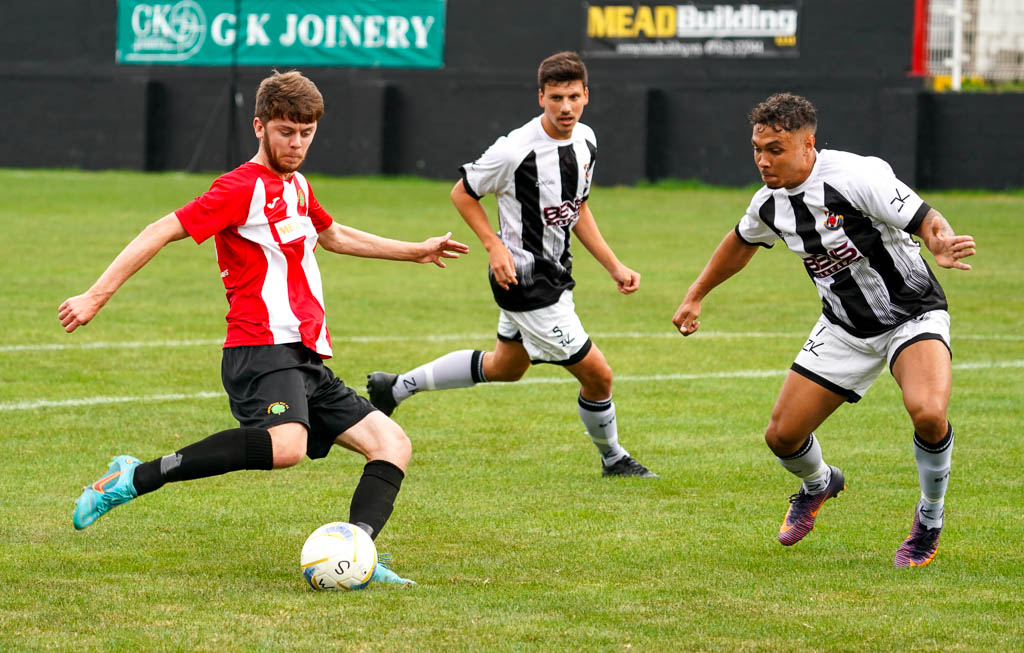 Hartpury progressed to the 2 nd round of the League Cup with a thoroughly deserved win over Shortwood, writes Jim Cunneen.

Whilst it is true that the management team used the cup game to give some players a rest and to get some valuable minutes into other squad members Hartpury played some excellent football and their fluidity and movement meant Wood could never relax.

With Jacob Muir carrying a knock, Wood named Alex Freeman in goal and he made a superb penalty save to deny ex-Wood striker Josh Beadle.

Hartpury were certainly the quicker team out of the blocks and within 3 minutes Beadle tested Freeman. Wood responded with a good move down the right flank and Bowes’ cross was only cleared with difficulty and then Bowes had a shot blocked.

Both sides were playing fast attacking football but there was a moment of controversy after 21 minutes when Hainalt appeared to elbow Tunnicliff but the referee booked both players and then Earle had a shot blocked on the line.

Hartpury took the lead after 26 minutes when Kang scrambled the ball home from 6 yards. Hainalt picked up a second yellow card for deliberate handball and saw red on the half hour and shortly after Earle smacked the bar following a cross from Minnican. That could have made all the difference but Hartpury became the dominant side.

Pepa was shown a yellow card after 43 minutes and may have been extremely fortunate not to pick up a second yellow on the stroke of half- time.

Tryner replaced Pepa at halftime. Wood conceded a penalty after 52 minutes but Freeman dived full length to turn Beadle’s spot kick round the post. He was powerless to prevent Towns making it 2-0 just 3 minutes later when he was given too much room and shot home from the edge of the area.

Wood rang the changes, and welcomed back Peyton from injury. Unfortunately, Peyton had only been on the field a few minutes when he went down under an innocuous challenge and dislocated his shoulder.

In the dying seconds, home keeper Sarkodie spilled a Payne cross but somehow Soule’s shot was blocked and diverted over the bar to preserve Hartpury’s clean sheet.