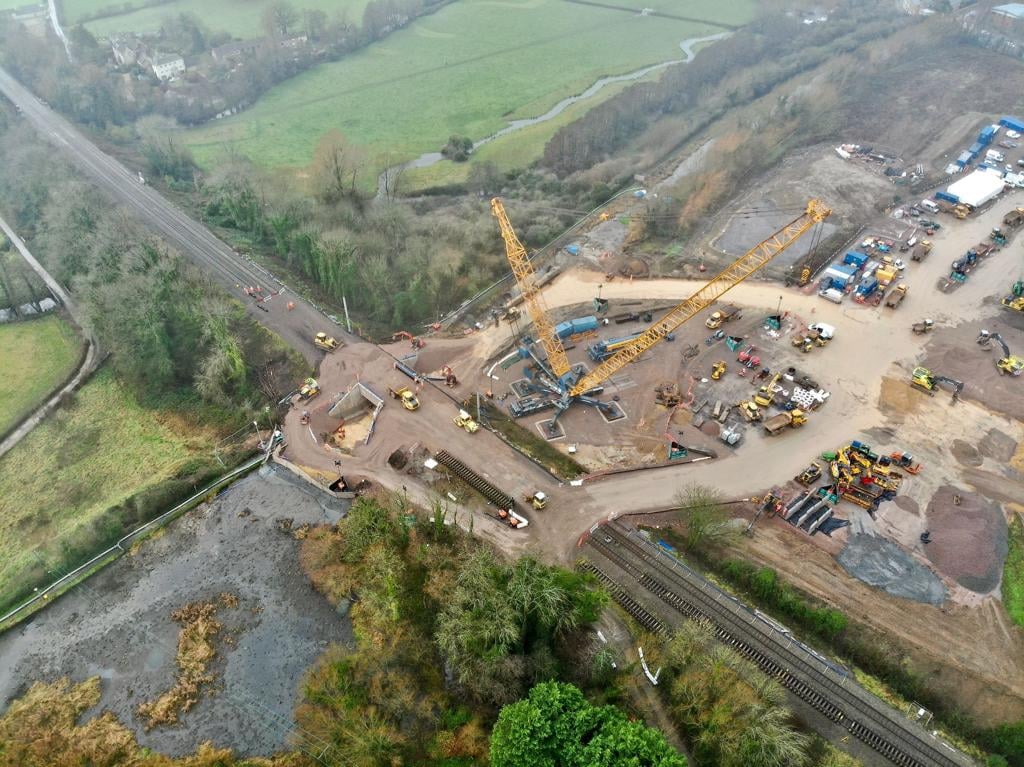 A major project to replace a railway bridge which means boats will be able to pass underneath it has been completed on time during the Christmas holiday.

A team of 150 operatives from Network Rail and its contractor Alun Griffiths worked around-the-clock on behalf of the Cotswold Canals Connected partnership to ensure the project was completed while the railway was closed for seven days between Christmas and New Year.

The original bridge had been replaced in the 1960s, with an embankment leaving only a narrow opening that was too small for boats to pass through, and needed to be replaced as part of the restoration of the Stroudwater Canal.

The Ocean railway bridge project took more than two years of planning, which included casting the new bridge sections on site, catching and relocating thousands of fish and draining a 230-metre section of the canal. The team used a total of 4,000 tonnes of material for the foundations and backfilling around the new structure and 500 tonnes of ballast (track stone) when reinstating the railway.

The new bridge sections, the largest of which weighed 64 tonnes, were lifted into place using a 1,200-tonne crane. Despite strong winds and heavy rain, which created challenging working conditions, Network Rail completed the project on time.

The new bridge, with its integrated towpath, will allow boats to pass under the railway as part of the restoration of The Stroudwater Canal which will eventually make Stroud and Stonehouse canal towns once again.

Chris Mitford-Slade, Cotswold Canals Connected Project Director, said: “This was the largest and most complex project on this section of the canal (known as Phase 1B) and we would like to thank all of those living in the locality for their support, understanding and tolerance.

“This project, and the canal restoration, would not have been possible without the support of the National Lottery Heritage Fund, private donations, fundraising and grants.”

Stroud District Council Leader, Doina Cornell, said: “This is more than just an engineering project; our aim is for the canal restoration to act as a catalyst for social, cultural, economic and environmental transformation. We look forward to working with communities and organisations along the canal and recognise the significant effort that will be required from volunteers to complete the project.”

Network Rail project manager, Deborah Elliott, said: “We are very proud to have completed this stage of the Ocean railway bridge replacement on behalf of Cotswold Canals Connected. Our teams worked through challenging conditions to deliver this important project for the local community and we were very grateful for their interest and support throughout.”

Alun Griffiths’ Managing Director, Stephen Tomkins, said: “After months of detailed planning, Griffiths are proud to have successfully and safely delivered the 172-hour blockade at the Ocean over the Christmas period. The success of this scheme is testament to the strong collaboration with Network Rail, Stroud District Council and their stakeholders, along with our trusted supply chain partners.

“As a local contractor, we pride ourselves on delivering schemes that leave a positive legacy for the communities in which we work. This scheme is a great example of leaving a positive legacy by once again having a navigable canal for users and the local community.”

A time-lapse film of the installation will be released soon, and will be available to view on the Cotswold Canals Connected website and social media channels.

The canal towpath either side of the bridge will remain closed until the end of March to allow follow-up work including re-establishing the clay lining to the canal, refilling the canal, constructing a new towpath and planting trees on the canal bank. An alternative walking and cycling route is signposted.

Finally, the site compound and other working areas will be restored to their previous condition.

Information events about the canal restoration project will take place over the coming months at a number of canalside locations.

Cotswold Canals Connected is a partnership of organisations led by Stroud District Council and the Cotswold Canals Trust which are restoring the canal network. Phase 1A, which is now complete, restored the section between Stonehouse and Thrupp. Phase 1B, which includes this project, will restore a further four-mile section between Stonehouse and Saul Junction providing a connection to the national waterway network.

The partnership is committed to significant outcomes for wildlife, people and communities, and our canal heritage.