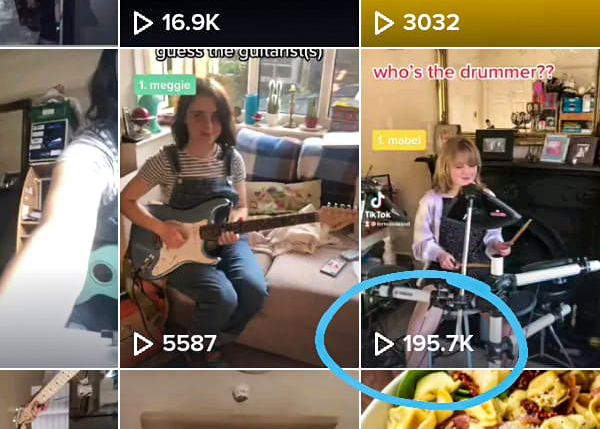 The Stroud-based teen band Tortellini has been enjoying widespread attention on one of the world’s biggest social media platforms, TikTok.

The video shows bandmates Aurelia, Obi, Meggie and Mabel each take a turn playing the drums with varying levels of expertise.

Viewers were invited to comment and guess which member of the band is the real drummer in Tortellini.

The video was posted by Aurelia last Wednesday, and the four musicians watched in surprise as numbers continued to rise throughout the day and into Thursday – until it hit 725,000 views.

“We were watching throughout the day as the views just carried on going up and up.”

Their bandmate Obi agreed that they underestimated how popular the video would get:

With three-quarters of a million views on a social media platform, the band were unsurprised at the nature of some comments but have taken any negativity in their stride.

“Some of the comments were just stupid,” says Mabel.

“It was actually quite funny to see the kind of ridiculous things people waste their time saying.”

Interest in their video seems to have reached a plateau now, so the quartet have turned their energies to rehearsing for their upcoming gig: a slot at the Randwick Wap in May.